SARIO (The Slovak Investment and Trade Development Agency) supporting the Voice of Slovak Business and CEO of SARIO, Róbert Šimončič quote on the Slovak Market.

More innovations are needed and the CEE region is seeing increasing demand for improved efficiency in the Automotive supply chain, increased R&D capabilities and innovation and these demands all play into the hands of Tier 1 & Tier 2 suppliers. Not only have the three established automotive producers made the core of the Slovak automotive industry but also a well developed and high–quality supplier network. Automotive Suppliers in Slovakia, Tier–1–2 suppliers, also export their products to plants located around Europe and to other overseas locations.

“Slovakia offers great export potential, stable political and economic environment and the common European currency. We believe that Slovak Investment and Trade Development Agency has been contributing to the success of the Slovak economy quite effectively. Under the leadership of the Ministry of Economy, SARIO in close cooperation with other governmental institutions brought important investments to our country and turned Slovakia to a production service and commercial hub of the Central Europe and a preferred location for hundreds of major investors from the US, Asia and Europe mainly in automotive, electronics, SSC and IT/ICT sectors. Our future objective is to attract high value added investments, since Slovakia has a great technological potential.” 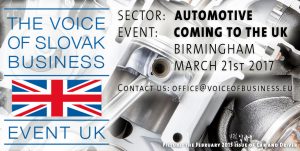 Birmingham, March 21st 2017
Learn all about the new “Detroit” of Automotive in SLOVAKIA.
Join us for this exclusive event in Birmingham.