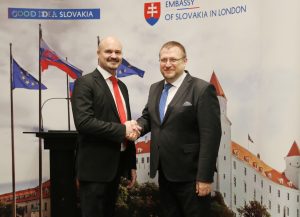 Mr Plant thanked Ambassador Rehak for his support of the Voice of Slovak Business and its desire to help British investment to Slovakia as well as the support in helping Slovak companies bring their services and products to the UK market.

In his introduction, Mr Plant spoke of Project UK, and the events that The Voice of Slovak Business will be running in their 2017 program. The UK will be the first country to be targeted to locate foreign investors interested in the Slovak Republic, Mr Plant spoke of how exciting this new project is. “Slovakia is a country of great opportunity for foreign investors.” He stated.

The Voice of Slovak Business is the “go to” place for foreign direct investment into the Slovak Republic. It has very close ties with SARIO, the Slovak Investment and Trade Development Agency. Together with SARIO and the most influential businesses in Slovakia we are here to help UK business enter the Slovak market. Mr Plant also mentioned that Slovakia is a very exciting place for business and there is a spike in interest especially now the Automotive Giant JLR are building a new factory in Nitra, Slovakia and other OEM’s are expanding operations here in Slovakia also.

Opportunity for Business
Mr Plant explained the mission of the Voice of Slovak business and he outlined the main services that would be provided to foreign investors. We would like to educate business about Slovakia and all the potential business opportunity. “We will concentrate on the following business sectors in Slovakia, Automotive, Real Estate, the excellent opportunities in shared service centres and the very strong ICT sectors”. He also introduces an export service for Slovak business looking to bring their services and products to the UK.

Mr Plant spoke briefly about the three events that will take place in the UK, the first on March 20th/21st in Birmingham in the Automotive business sector and other in May and later in the year in September. 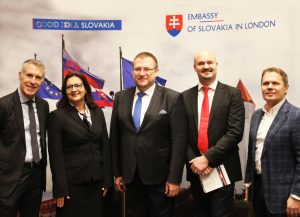 Finally Mr Plant thanked Ambassador Rehak for all his support and for the superb event, he also thanked SARIO and Vladimir Lezak for supporting Project UK and for introducing the Voice of Slovak Business and also mentioned that he was excited to be alongside Graham Thompsett, Head of talent acquisition at JLR UK and Daniela Schweizer HR from JLR Slovakia. The evening was attended by nearly 200 business professionals who enjoyed delicious Slovak cusiine prepared by the Slovak Embassy team. Thank you to all that attended.